Scholarships are made available to the children of full-time employees of Dover and its Operating Companies worldwide.  Selections are made by a four-member committee of college admissions professionals from prominent universities based on academic excellence, leadership abilities and extracurricular activities.  Winners represent both high school seniors and current college students who may receive up to $10,000 in scholarship support over the four years of their undergraduate education.  Now in its ninth year, the program has made 314 awards providing over $2.1 million in scholarship support. 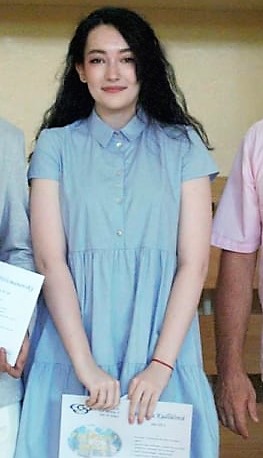 Bibiana currently attends Gymnazium Park mladeze located in Kosice, Slovakia which is one of the largest high schools in the region with over 600 students.  This school is also special in that it is known for offering bilingual Slovak/Spanish classes to it’s student base. Gymnazium Park is a very eco-friendly facility that encourages the students to strive daily to think about the environment and their effects on it.  This ideal is reflected in a project currently underway where they hope to transform the roof of the school to a ‘green roof’ or garden area.  So far during her high school career, Bibiana has received the 2018 Star Student award of excellence and was also awarded first place in Shakespeare’s Memorial in 2018 which is a regional and nationwide competition.

Ms. Kudlacova maintains an A grade average and after leaving high school, she has hopes of attending either Leiden University (The Netherlands) or Jagellonian University (Poland) - both of which she has been conditionally accepted to.

“We are honored to be supporting Bibiana and assisting her in achieving her educational goals” said Róbert Dzurilla (General Manager - SWEP Slovakia).  “We recognize that education is not only essential for the continued success of our business, but also strengthens the fabric of the communities in which our employees live and work.”