The most basic rule of heat transfer is that heat always flows from a warmer medium to a colder medium. Heat exchangers are devices to facilitate this heat transfer with the highest possible efficiency. A good heat exchanger is able to transfer energy (heat) from the hot side to the cold side with small thermal losses and high efficiency. Good heat exchangers are typically small pressure vessels with a small pressure drop, and can exploit small temperature differences between two media.

1. What is heat transfer?

Heat transfer between media is controlled by a few simple but fundamental rules:

In single-phase heat exchange, there is no phase change in the media. Transfer may be liquid/liquid or gas/liquid or even gas/gas, with no change of phase between the BPHE’s inlet and its outlet. An example of such a process is a water-to-water application where the water flow on side 1 changes temperature from 30 to 50 °C and the flow on side 2 changes temperature from 65 to 45 °C, i.e. without a phase change. The most common single-phase applications for BPHEs are water-to-water and oil-to-water. The main purpose of the BPHE in oil applications is to cool engine oils, hydraulic oils, transmission oils, compressor oils, etc., with water

In two-phase heat exchange, there is a phase change on the cold side, the warm side or both.  What happens when a liquid or gas changes phase is described below.

If heat is added to a liquid, the temperature of the liquid will rise until it reaches its boiling point. Adding further heat will not raise the temperature. Instead, it increases the gas content of the liquid, resulting in a two-phase mixture of liquid and gas. The gas generated forms bubbles during boiling. The temperature will not rise until all liquid has been vaporized. When the temperature of the gas becomes higher than the boiling point, the gas is described as superheated. This process is typical of what happens inside an evaporator in a cooling system. The refrigerant enters the evaporator as a liquid and leaves as superheatedvapor.

The opposite occurs in a condenser. First, superheated gas is cooled until it reaches its saturation point, where liquid droplets are formed. When all the gas has been transformed to liquid, the bubble point is reached. Maintaining the same pressure in the vessel while further cooling the liquid leads to a lower temperature, the result being described as a subcooled liquid.

This image shows what happens when water in different states is mixed. 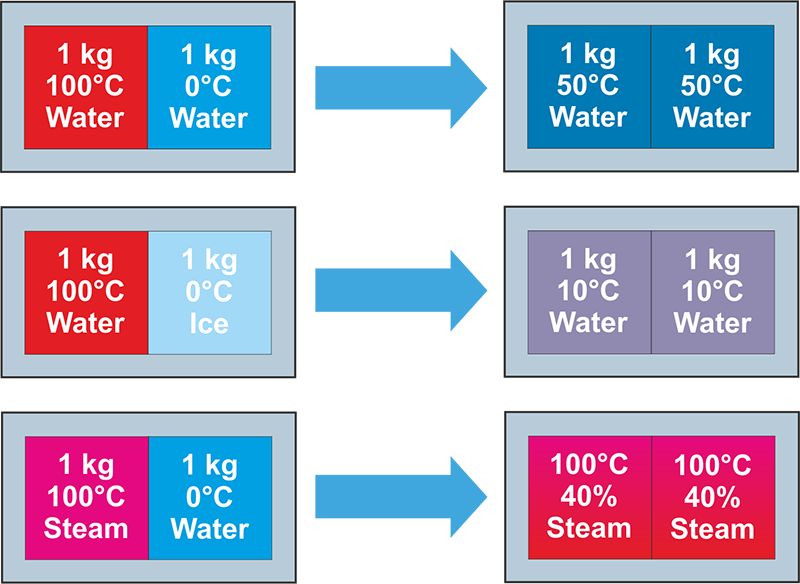 The water example illustrates why evaporation and condensation are used commercially to gain or lose, respectively, the large amount of latent heat involved in the  transition between the liquid and gas phases.

The ability to transfer heat in liquid and gaseous media depends on the turbulence of the medium. High turbulence is desirable for efficient transfer. Near a plane wall, there is always a film with laminar flow of gas or liquid, depending on the type of medium present (cf. Energy Balance section). The heat transfer in a film with laminar flow is poor, because convectional heat transfer is negligible. However, if higher turbulence can be achieved, the insulating film becomes thinner, convection increases and, consequently, heat can be transported more efficiently, as shown here: 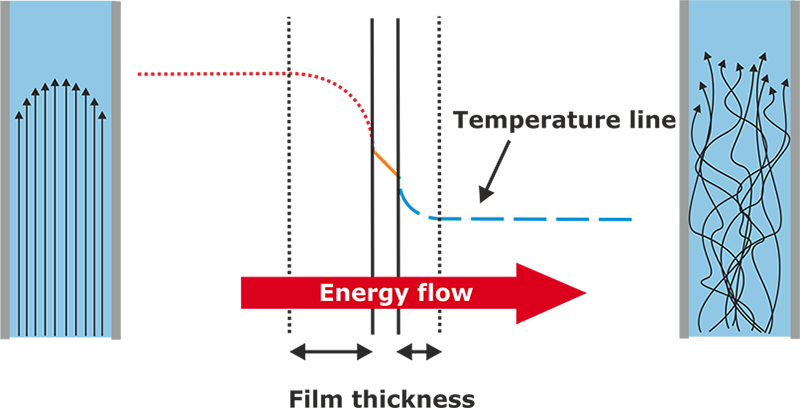 The Reynolds (Re) number is a dimensionless number used to describe the “state” of a fluid (turbulent or laminar flow). The Reynolds number is defined as in equation 1:

(For SWEP heat exchangers, the hydraulic diameter can be approximated as twice the BPHE’s pressing depth.)

High turbulence is achieved by increasing the disturbances in a flow. A corrugated surface thus results in a more turbulent flow than a plane surface.

The flow inside a BPHE can be much more turbulent than the flow inside a shell & tube (S&T) heat exchanger, for example. This is because the plates of the BPHE are corrugated and folded due to the herringbone pattern, like you see in this image: 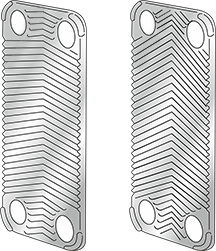 For a proper comparison between the Reynolds numbers of different passages, their geometries should be exactly the same. This is of course not the case for a comparison between a BPHE channel and an S&T channel, which have different hydraulic diameters. However, the practical fact remains: fully turbulent flow in a BPHE is achieved with a lower flow velocity.

In addition to the herringbone pattern on the plates, other parameters that lead to a high Reynolds number include:

Viscosity is also an important factor when discussing flow regimes. For example, oil has a higher viscosity than water, and it is therefore more difficult to achieve turbulent oil flows. A medium with a low viscosity might therefore be more useful as a heat conductor.

Increasing the area of a heat exchanger implies that more energy can be transferred. For BPHEs, a larger area can be achieved by increasing the size and/or number of plates, which means more stainless steel and copper brazing. Hence, increasing the surface area implies higher costs.

Energy may be transported from a hot fluid to a colder fluid in three ways:

In BPHEs, energy is therefore transferred by conduction and convection. Examples of these types of energy transport are shown here.

The space between the dotted lines and the wall in the following image is often called the film thickness. The heat transfer rate within the film is significantly lower than in the bulk liquid, because the temperature gradient decreases dramatically in this area . 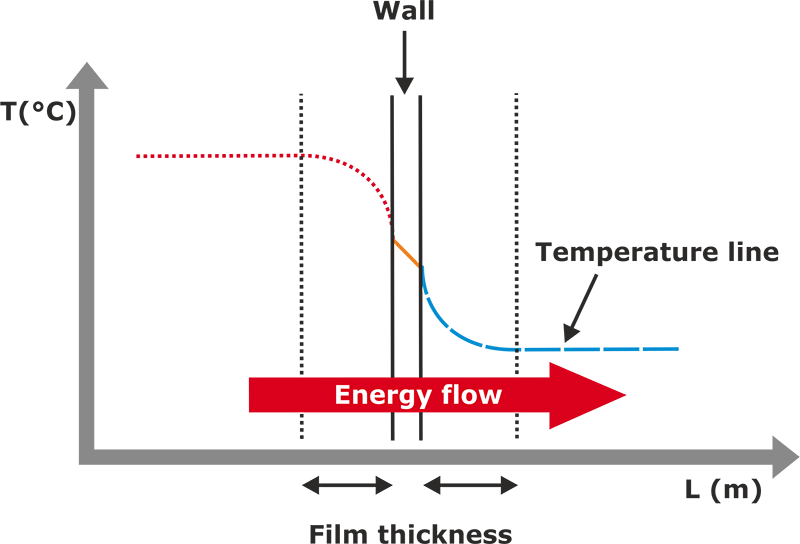 The reason for the poorer heat transfer is the laminar flow that is always obtained near a plane wall. Laminar flow does not transfer energy as well as turbulent flow.

The overall heat transfer coefficient (k) describes the total effect of conduction and convection on the energy transfer:

With a higher overall heat transfer coefficient (k), more energy can be transferred per heat transfer area. This makes the heat exchanger more cost-effective, so it is very important to improve the k-value by all means possible.

Here you see a single-phase temperature profile through a BPHE. 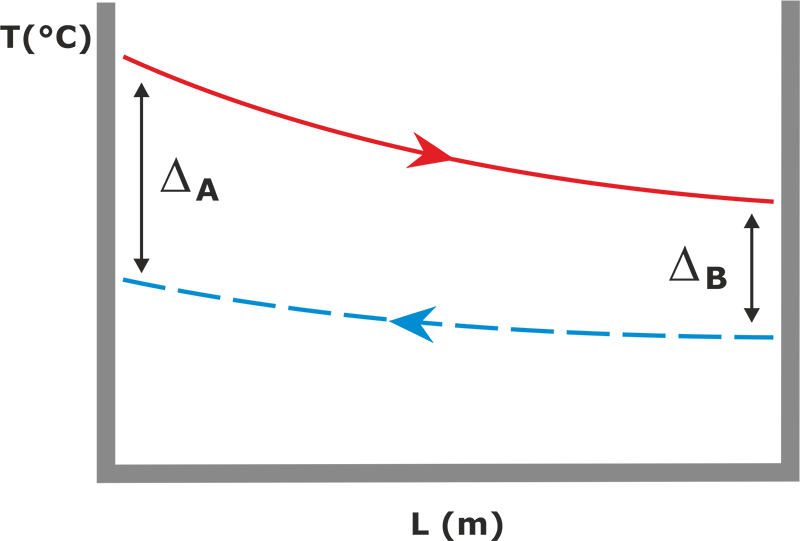 Note that the logarithmic mean temperature difference (LMTD) may be used only for single-phase calculations.

The energy in a liquid flow can be described with the following formula:

Note that equation 5 is valid only for single-phase heat exchange.

Equations 2 and 5 together describe the conservation of energy inside a BPHE, which is shown in equation 6. This equation, as well as the image below indicate that there are no theoretical heat losses to the surroundings in a BPHE. 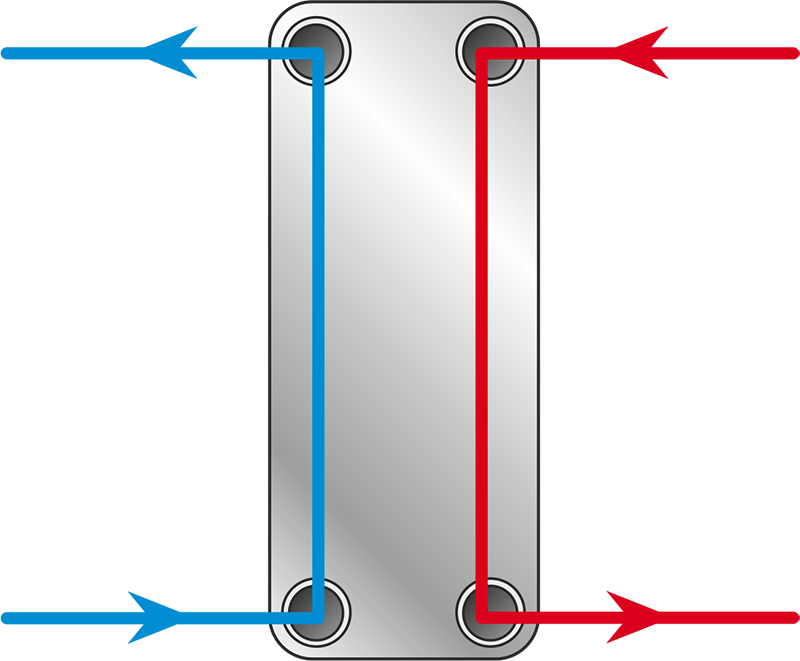 The flows inside a heat exchanger can be arranged in various ways to fulfil different purposes. The possibilities are counter-current flow, co-current flow and cross-flow, the first two of which are shown here. 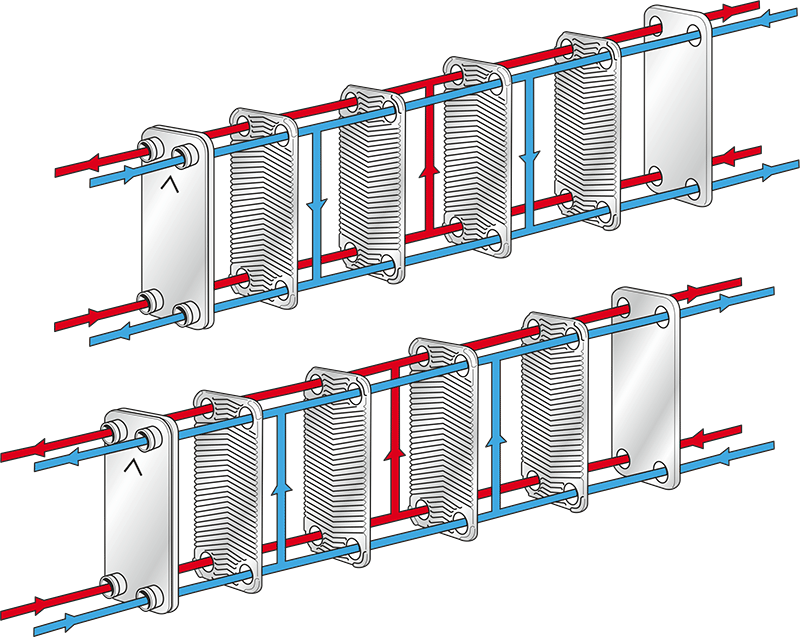 There are different forms of so-called cross-flow heat exchangers in which the flows are more or less mutually perpendicular.

The motive for using counter-current flow becomes obvious by referring to equation 6.

A high LMTD implies that a smaller heat transfer area is needed, i.e. the BPHE can be manufactured with fewer plates. However, co-current flow is also used in BPHEs when the application so demands, e.g. in flooded evaporators. A consequence of a co-current arrangement is that the outlet temperature of the cooling medium can never exceed the outlet temperature of the hotter medium. It is also worth noting that in a co-current arrangement there is a large temperature gradient at the beginning of the evaporator, which makes boiling start earlier: 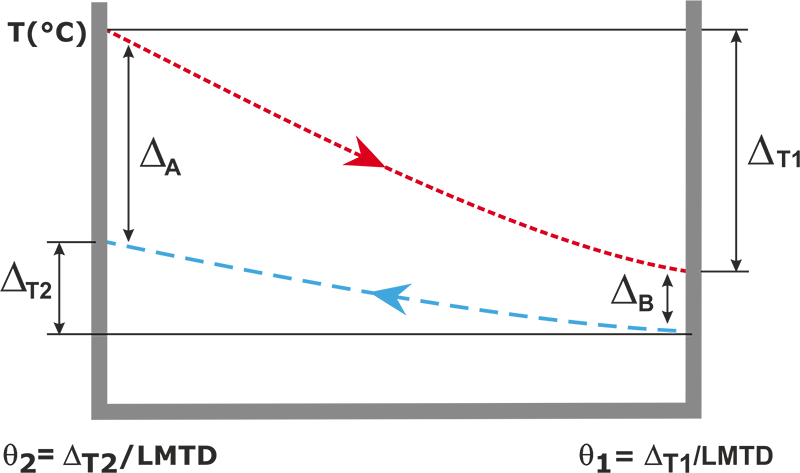 A BPHE with a long thermal length can solve cases that are thermodynamically more problematic than can a BPHE with short thermal length. Different cases are shown in the 3 following diagrams, and the possible solutions for these cases are discussed below.

Operations with close temperature programs (diagram above - "High") demand long BPHE plates or a multi-pass BPHE. The purpose of those solutions is to enhance heat transfer through the BPHE.

Another solution is to design the BPHE with a high-theta pattern (see image of the plates), which will increase the turbulence of the fluid and thus increase the heat transfer efficiency.

An easier case, i.e. with small temperature changes on each side (diagram above- "Low"), will most probably be solved with a short single-pass BPHE. The plate pattern for easy jobs may very well be a low-theta pattern (see image of the plates), which leads to a low pressure-drop through the heat exchanger.

Asymmetric operation (diagram above - "High and Low") occurs when the temperature change on one side of the BPHE is much larger than on the other. The solution for this is a two-pass over one-pass BPHE, as shown in the below image, or an asymmetric BPHE. An asymmetric BPHE uses a design with a mixture of high-theta and low-theta plates.

When a flow is disturbed, a pressure drop (ΔP) is created, i.e. the flow pressure at the beginning of a passage is higher than at its end. Pressure drop is a phenomenon with both positive and negative consequences for the heat transfer process.

Excessive pressure drop is of course negative, because the flow through the BPHE requires a lot of pump power. High pump power can be achieved only with large pumps, which demand a large amount of electricity and thus make the operation expensive.

The positive result of pressure drop is the greater turbulence. Turbulence is desirable in heat exchangers, because it improves heat transfer (cf. Flow Regimes section).

There are some proportional (~) relations that are useful to keep in mind when designing a BPHE:

The pressure drop in a CBE channel mainly depends on different variables as shown in the following table: 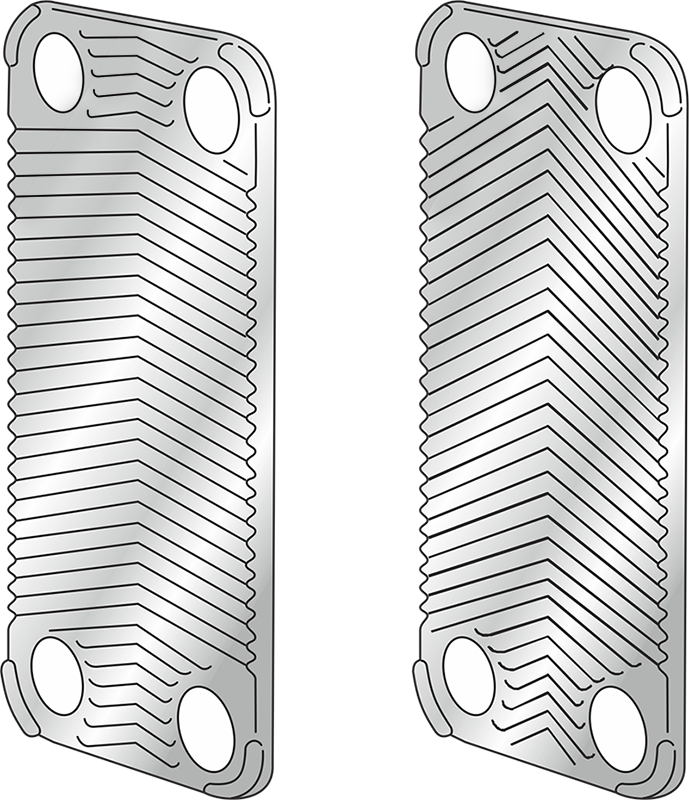