Pure water, i.e. water with fewer impurities, has chemical and electrical properties that make it the optimal coolant in certain applications.

1. Concept and Use of Deionized-water Systems

When electronics are working, heat is generated that may damage sensitive equipment, which means the electronics must be cooled. Ions in the cooling water may lead to short-circuits in electronic equipment if there is direct contact between the water and the equipment; the challenge is to maintain the cooling-water circuit free from ions. Pure water, i.e. water with fewer impurities, has chemical and electrical properties that make it the optimal coolant in these applications.

The various water purification processes are described in the chapter Water as a Heat Transfer Fluid --> 1. Purification Processes and Water Types.

Deionized-water cooling systems are used in a wide range of applications. All these cooling systems are based on the same principle (see Figure 9.1). First, there is a main loop cooling the object, e.g. an electronic circuit. The water transfers the heat to a water-to-water or a water-to-air heat exchanger. Second, part of the flow from the main loop passes through a water processing circuit in which ions and oxygen are continuously removed from the water if necessary. After passing through an ion exchanger, the water is also often mechanically filtered. Different deionized-water systems require different levels of water treatment. The design of the water processing circuit may therefore vary, depending on the required level of purification. The differences between a high-reliability system and a system allowing a higher proportion of redundant components involve mainly the quality requirements for installed components. Various water purification processes are described in the chapter Water as a Heat Transfer Fluid/Types of Water and Treating Processes. 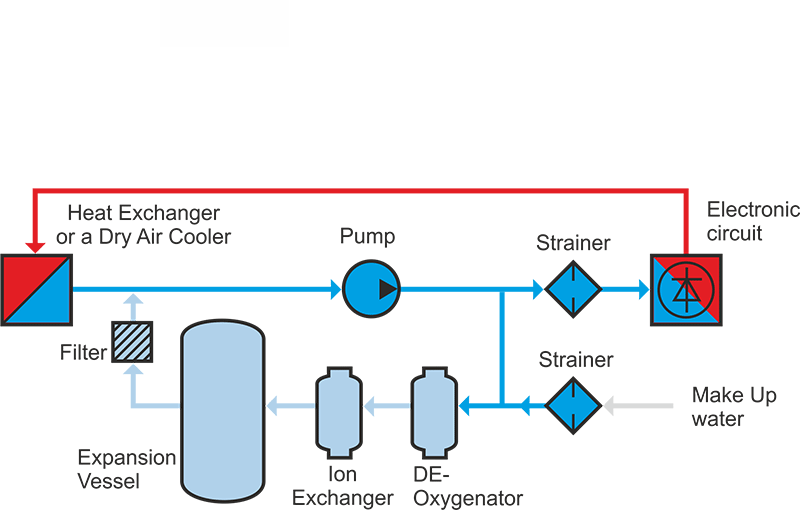 Figure 9.2 shows an example of a deionized-water cooling system. In this system, the main loop consists of a frequency converter, i.e. the electronic equipment being cooled, and a BPHE. In this loop, the purified water is cooled inside the BPHE by raw water. The raw-water circuit may also contain an air-cooler, which cools the room or space where the installation is mounted. Some of the flow passes through the water processing circuit, which contains an ion exchanger, a mechanical filter, air-removal facilities and an expansion tank to keep the water pure. The components of the system are described in more detail in Figure 9.3. 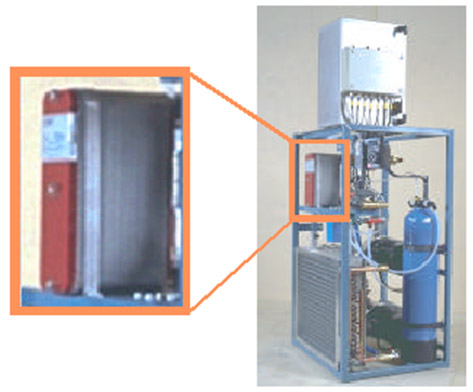 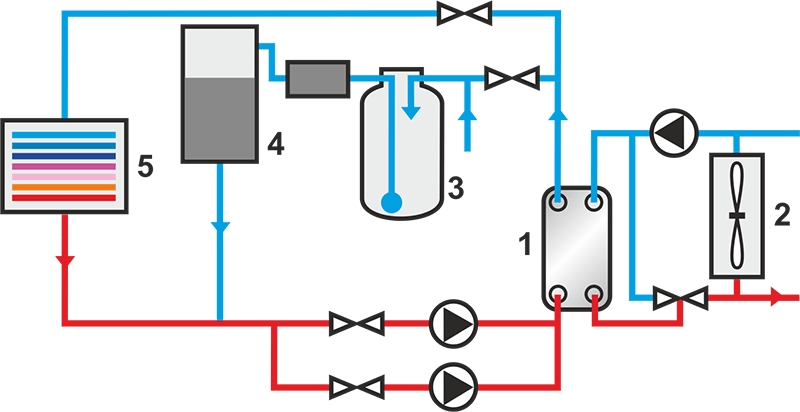 The components of the system are shown in Figure 9.3. The main loop consists of a frequency converter (5), i.e. the electronics, and a SWEP Minex (1). The water in the main loop is cooled with a raw-water circuit inside the Minex. The raw-water circuit contains an air-cooler (2) that enables cooling of the room or space where the installation is mounted. The treatment circuit with an ion exchanger (4), fine mechanical filter, air removal facilities and an expansion tank (3) keeps the water deionized.

An induction furnace is an AC electric furnace in which the primary conductor is coiled and generates, by electromagnetic induction, a secondary current that develops heat within the metal charge. To avoid any short circuits in this electrical environment, only deionized water can be used for cooling the furnace. The deionized water circulates round the furnace as jacket water, and transfers the heat to the BPHE in the circuit shown in Figure 9.4. The cooling fluid in the cooling circuit is usually raw water.

Figure 9.4 Principal components of a cooling system for induction furnaces.

Laser systems generate heat. To protect critical components from overheating, the heat must be removed efficiently using water. When selecting a water filter for a laser, consideration must be given to the materials in the cooling loop. Using raw water in a cooling loop can cause premature failure of expensive components. Water containing oxygen can cause oxidation of the metals, and water containing ions can cause deposits and scale formation. For this reason, cartridges that can remove both ions and oxygen are usually used to treat the water circuit, which is then cooled in a heat exchanger.

The term laser is an acronym from Light Amplification by Stimulated Emission of Radiation. Lasers are devices that amplify light and produce coherent light beams ranging from infrared to ultraviolet. Lasers use atoms to store and emit particles of light. The electrons in the atoms of a laser medium are first pumped, or energized, by an energy source. In this excited state the atoms are then stimulated by external photons to emit the stored energy in the form of photons (stimulated emission). The photons emitted have a frequency characteristic of the atoms and travel in step with the stimulating photons. These photons in turn stimulate other excited atoms to release more photons. Light amplification is achieved as the photons move back and forth between two parallel mirrors, triggering further stimulated emissions. The resulting increased number of photons is emitted in the form of an intense, directional and monochromatic laser beam through the partially reflective mirror. Figure 9.5 shows a laser demonstration. 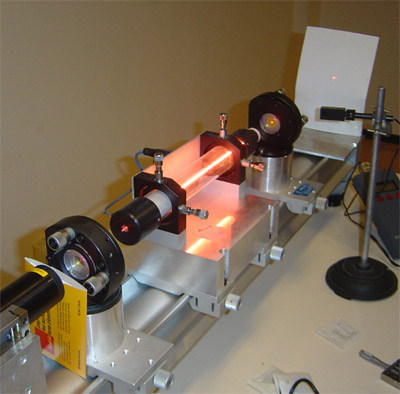 Figure 9.5 Helium-Neon laser demonstration at the Kastler-Brossel Laboratory at the University of Paris. The glowing ray in the middle is an electric discharge producing light in much the same way as a neon lamp; it is not the laser beam. The laser beam passes through the air and appears as a red point on the screen to the right.

A light beam is coherent when its photons propagate in step with one another. Laser light, therefore, can be made extremely intense, highly directional, and very pure in frequency. Laser devices now extend into the X-ray frequency range. A laser consists of three basic components:

The energy source can be light from special lamps, light from another laser, an electric current or a chemical reaction.

The lasing medium can be a gas, liquid, semiconductor or solid that emits its own light (radiation) when stimulated.

Laser types are based on the laser medium used. There are many types of lasers, the most common in industrial use being:

Laser systems for industrial use provide flexible and effective solutions for advanced manufacturing applications. Laser systems can be controlled and directed with extreme precision and can be used in a wide spectrum of industrial applications. In addition to lasers, systems may include precision or fiber optics, control software, robotics, machine vision, motion control and parts handling. Lasers may be used in medical devices such as laser scalpels. In industrial applications, lasers are used mainly for cutting, welding and marking.

Figure 9.6 shows a laser system used for cutting and drilling. The ignition lamps and the laser rod produce heat and require cooling. The system’s controls are electronic, so there must be no contaminants.

Water is pumped from a tank through a deionization circuit. In a second loop, some of this deionized water flows through a mechanical filter and then through the laser application. One BPHE can be used parallel with the laser application, to remove heat where it is generated, and a second BPHE after the laser system to achieve the required temperature for the deionized water. When removing ions it is important to know whether there is any copper in the loop. If so, mixed bead ion exchange filters should not be used for deionization because they make the water too pure, which may affect the copper.

If the system includes any other metals apart from stainless steel, a separate bed/oxygen removal cartridge is also needed. 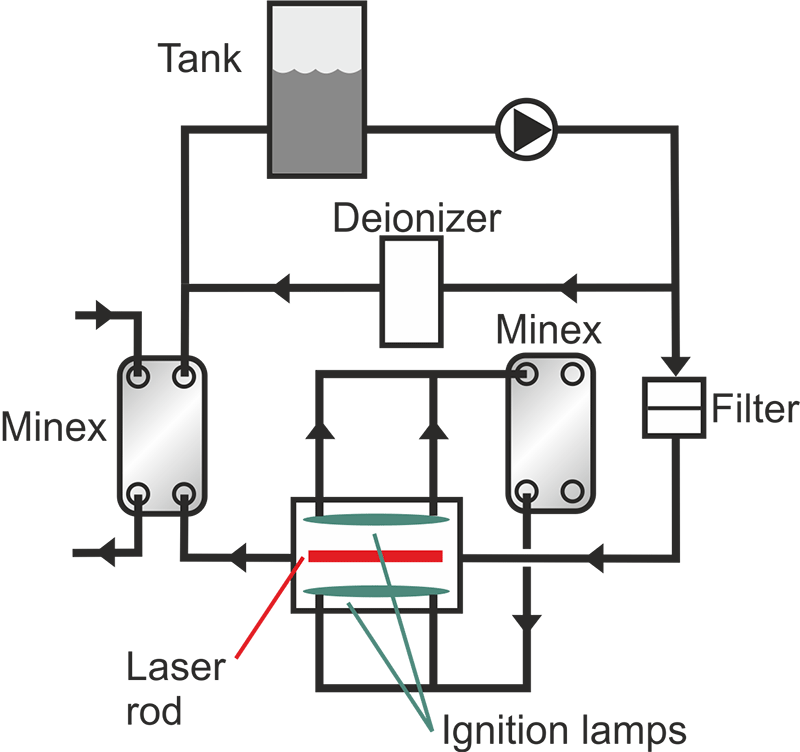