Reversible refrigerant systems are designed to provide cooling and heating from the same heat exchangers, depending on the requirements of the recipient. The same BPHE thus acts both as an evaporator and as a condenser. The condenser-evaporator duty is switched by a four-way reverse valve, as shown in Figure 7.20.

Because the refrigerant flow is reversed when changing from evaporator evaporator to condenser, while the water direction remains constant, the BPHE cannot operate in counter-current flow for both duties. When deciding whether the condenser or the evaporator should work with a co-current flow pattern, some design parameters must be taken into account:

BPHEs mounted in reversible systems must operate both as evaporators and as condensers, as mentioned above. The BPHE performance in evaporator duty is often vital for the system economy. It is therefore common to install a dedicated BPHE evaporator with a distribution device in the lower left refrigerant inlet port (F3). When the system is reversed, the evaporator operates as a condenser instead, with the hot gas entering in the top left port (F1) and leaving as liquid through the lower left port (F3), where the distribution device is situated.

One may wrongly suspect that the distribution device, which induces a high pressure-drop when operating as an evaporator, disrupts the operation of the condenser. However, because the leaving refrigerant flow is 100% liquid, which has a much smaller specific volume than gas, the pressure drop through the distribution device is negligible when the heat exchanger operates as a condenser. 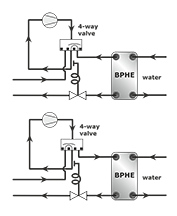