A pressure drop in the liquid line reduces the pressure of the warm condensate liquid, with a risk of spontaneous boiling (flash gas) if there is little or no sub-cooling. Expansion valves are especially sensitive to flash gas, because it seriously disturbs their operation.

Applying additional sub-cooling has further advantages for the system. By extracting more energy from the condensing side, i.e. increasing the sub-cooling, the amount of flash gas formed after the expansion valve will decrease. Because the flash gas formed after the expansion valve does not contribute to the refrigeration effect, a larger amount of liquid refrigerant entering the evaporator increases the system performance. The improvement in the system performance, COP, is 0.5-2% per degree sub-cooling, depending on the type of refrigerant and the operating conditions.

In evaporators, just like condensers, the largest amount of energy is transferred by the latent energy when liquid is transformed to gas or vice versa. Increased liquid content therefore increases the total heat of absorption for the same mass flow and hence also the COP.

To achieve substantial sub-cooling with a plate heat exchanger condenser, it must operate with a variable condensate level. This may cause practical and stability problems as discussed below. An alternative is to vary the flow of the secondary fluid, but this solution is not commonly used because it is more complex and affects the condenser capacity.

A sub-cooling operation is a one-phase heat exchange with low turbulence, due to the small volume of the liquid refrigerant flow. The area needed for sub-cooling is therefore relatively large. When the condensate level is purged, a large heat surface area that was previously used to sub-cool liquid refrigerant becomes available for condensing operation until the liquid level rises again. By expanding into the extra available heat transfer area, the condensation pressure and temperature decrease, which may affect the total heat of rejection. The rapid fluctuations in heat transfer area may also give control problems and fluctuating condensing performance.

Incondensable gases, and oils less dense than the refrigerant, can accumulate in the interface between the gas and liquid level in the condenser. These media reduce the heat transfer and have to be purged periodically with condensate.

Seasonal variations can also influence the condensate level. The low hold-up volume of a plate heat exchanger may be too small to compensate for this while maintaining the desired conditions. A surge liquid receiver must then be installed after the condenser to compensate for the varying refrigerant volume. It is important not to allow the leaving refrigerant liquid to reach equilibrium in a through liquid receiver, because this will remove all sub-cooling from the system. In this case, a separate sub-cooler should be installed after the receiver. Figure 7.11 shows the system outlines for surge liquid receivers and 7.12 for through liquid receivers. 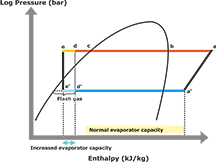 Figure 7.9 The effects of subcooling shown in a log P/h diagram. Increasing the subcooling from (c-d) to (c-e) increases the corresponding available cooling capacity inside the evaporator from (a'-d') to (a'-e'). The amount of flash gas formed after the expansion valve is also reduced, as shown in the figure.

Figure 7.10 Example of arrangement for condensate subcooling. Inert and insoluble decomposition products accumulate above the condensate surface and are easily trapped there, with a resulting decrease in the heat transfer coefficient (k-value).

Figure 7.11 A surge receiver system. The surge type of receiver is normally bypassed by the flow and is useful for handling normal variations of refrigerant volume in the plant. With this type of receiver, it is possible to sustain subcooling after the condenser/subcooler. 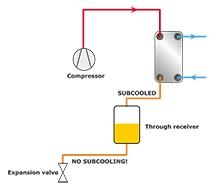