Freeze protection is a very important subject when designing a refrigerant system. The problem of freezing concerns only the evaporator, because it normally cools water with a refrigerant evaporating at low temperatures. It becomes a problem when the system is poorly designed and/or when external factors have a negative influence.

Situations with a potential freezing risk

The various methods for increasing the evaporation temperature during the start-up include:

For heat pumps with outdoor air-to-refrigerant evaporators, it is sometimes necessary to defrost the coil. This can be achieved by reversing the refrigerant flow. The evaporator is then run as a condenser for a short time, allowing the ice on the outside of the coil to melt. Because the coil is very cold when defrosting starts, the condensing pressure will be very low. The situation during defrosting is therefore the same as when starting up an air-cooled system at low ambient temperatures, i.e. the evaporation will be relatively low. During the defrosting cycle, the heat exchanger that normally operates as a condenser will be operating as an evaporator. Due to the low evapora-tion temperature, there may be a risk of freezing in this heat exchanger.

Protection methods against freezing on the secondary fluid (water) side

Freezing protection on the secondary fluid (water) side uses indirect methods to avoid or minimize situations with a risk of freezing. Figure 8.26 shows a refrigerant system that can be protected from freezing by controlling the water side of the system. Some of the protection methods are described below.

Protection methods against freezing on the refrigerant side

Figure 8.25 Suction temperature at start up, with and without protection against freezing. 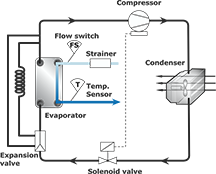 Figure 8.26 Refrigerant systems can be prevented from freezing by controlling the water side. 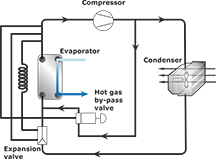 Figure 8.27 Refrigerant system with freezing control using a hot gas bypass valve on the refrigerant side. 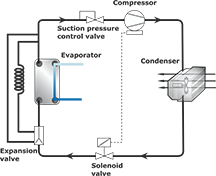 Figure 8.28 Refrigerant system with freezing control using a suction pressure control valve on the refrigerant side. 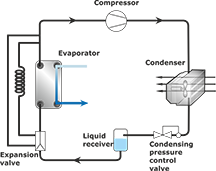 Figure 8.29 Refrigerant system with freezing control using a condensing compressor control valve on the refrigerant side.