Field experience and extensive laboratory tests carried out by SWEP R&D department have shown that the size of the connections and pipes on the refrigerant side of the BPHE can have an important effect on the performance of the BPHE and the system in total. Selecting the correct connections and corresponding pipes can help to improve the performance and stabilize the evaporation process.

Evaporation is a complicated two-phase process where the two-phase fluid must be evenly distributed over the channels as well as over the plate itself. Great efforts have been made to optimize efficiency with special plate patterns and distribution devices. Figure 8.21 shows the BPHE and the immediate components, i.e. connections and pipes, mentioned in the text.

SWEP's distribution device is most effective when liquid and vapor are a homogeneous mixture at the entrance of the BPHE. Directly after the expansion valve, vapor and liquid are completely mixed. They will stay in this homogeneous form for a reasonable time provided the flow velocity is high enough to create the necessary turbulence. If the velocity is too low, i.e. the pipe dimension is too large, phase separation will occur more quickly. The refrigerant flow into the evaporator then becomes divided into one fast vapor stream and one slower liquid stream, giving less predictable performance. Using a pipe that is too small induces unnecessarily high pressure drop and results in energy losses.

In Figure 8.23 the suggested pipe and connection setup are shown. The inlet connection selected should never be larger than the inlet port diameter of the F3 port, because this increases the risk of phase separation. Recommended dimension for the inlet pipes and F3 connections depends on the case but in general it is beneficial to have an inlet vapor/liquid velocity of 10-25 m/s. Due to the distribution device, the inlet port size (F3) is smaller in a dedicated evaporator than in a B-model.

The refrigerant vapor leaving the evaporator should have sufficient velocity to carry the small volume of compressor oil circulating in the system. Otherwise, the oil will accumulate and adhere to the channel walls and dramatically reduce the heat transfer coefficient. This results in a lower evaporation temperature and reduced system capacity.

A further increase in the connection and suction pipe dimensions will reduce the pressure drop in the suction pipe. However, the risk of maldistribution and instability problems in the evaporator remains. SWEP recommends changing to a larger model, using double vapor exits or oversurfacing the BPHE to compensate for the decreased efficiency.

Figure 8.24 shows outlet connection and piping variations. Versions (d) and (f) are considered immediately unsuitable. In version (d), an unnecessary constriction is induced, which could cause pulsations in the evaporator if the port velocity is high. Versions (b) or (e) are suggested instead. Version (f) has a large connection but a reduced pipe that will increase the flow velocity in the suction pipe. Versions (b) or (c) are recommended instead. Versions (a) and (e) may be unsuitable, depending on the system design. If calculations show that connection and pipe velocities are above 25 m/s, an increased pipe size will decrease energy losses. However, there is still a risk of maldistribution. Designing a larger BPHE or two vapor exits will decrease the port velocity. In version (e), the pipe is also reduced, which will increase the velocity, and the fitting will induce an extra pressure drop.

By choosing the correct refrigeration side connections, the performance and stability of evaporation can be improved. 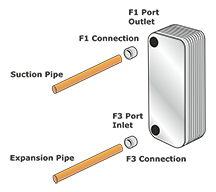 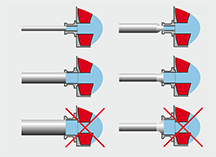 Figure 8.23 Suggestions for different inlet (F3) connections. The inlet connection can be smaller than the inlet port (top) or the same size (middle), but never larger (bottom).